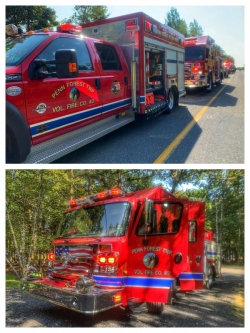 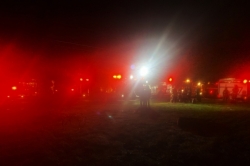 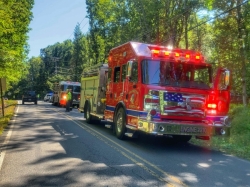 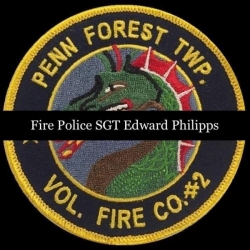 Command 2277 with UTV 2278, Utility 2279 with UTV 2276, and Rescue 2255 responded to a search off Behrens Road. Volunteers made contact with the patient within ten minutes of arrival. District 12 also...
Read more »
Fire Glossary

Click a letter to view all entries that begin with that letter.

22 entries in the Fire Glossary beginning with "T"

A car crash situation, where one car has hit the side of another which is travelling at an angle horizontal to the car which has struck the other car, generally these crashes are quite severe and much fuel is spilled.

System in which each firefighter is issued two identification tags, one of which is then collected by a safety officer and held while the firefighter is in a hazardous area. To reclaim the tag, the firefighter must present the matching tag upon exit from the hazard. Any unclaimed tags after an event" (such as a collapse or explosion) means the corresponding firefighters are missing. May be implemented as passport system in which first tag is presented to staging officer upon arrival (for tracking) and second tag is held by IDLH safety officer

Portion at rear of fire engine where firefighters could stand and ride (now considered overly dangerous), or step up to access hoses in the hose bed.

Large, mobile tank of water or other firefighting agent; may be airborne, as used in wildland firefighting, or truck-mounted. Essential in rural areas lacking hydrants.

Any combination or single resources assembled for a particular tactical need, with common communications and a leader. A Task Force may be pre-established and sent to an incident, or formed at an incident.

(TFT) a popular brand of adjustable fog stream Combination Nozzle, now a ubiquitous term for that type of nozzle.

A preconnected attack line that is typically 1 3/4 diameter and stored either on the front bumper of the apparatus or in an exterior (exposed) side well. Trash Lines are typically shorter length than Cross Lays and are intended for use against dumpster fires,etc. where a longer length of hose (and consequent rebedding after the suppression is complete) is not desired.

A Smokejumper can sometimes parachute into the tree canopy if a clearing is not available or suitable.

Apparatus carries water, pumps water, carries hose and other equipment; firefighters who may carry out direct attack or support other engine companies.

A method of loading preconnected attack line into a hose bed or crosslay, often facilitating rapid hose deployment in a pre-flaked configuration.

A group of firefighters assigned to an apparatus that carries ladders, forcible entry tools, possibly extrication tools and salvage covers, and who are otherwise equipped to perform rescue, ventilation, overhaul and other specific functions at fires; also called ladder company".

A widened part of a fire break used for turning vehicles around, also used as a safe area during entrapment.

The protective clothing worn by firefighters

The protective clothing worn by firefighters, made of a fire-resistant material such as Nomex or Aramid, and designed to shield against extreme heat. Sometimes called bunker gear. See PPE. Includes helmet, jacket and boots, and some departments include fire-resistant pants.

Rotating base of an aerial ladder that permits the ladder to be elevated and extended in any direction from a fixed location.

Two-in, two-out (or two in/two out

Refers to the standard safety tactic of having one team of two firefighters enter a hazardous zone (IDLH), while at least two others stand by outside in case the first two need rescue thus requiring a minimum of four firefighters on scene prior to starting interior attack. Also refers to the buddy system" in which firefighters never enter or leave a burning structure alone.

22 entries in the Fire Glossary beginning with "T"